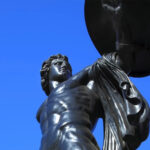 A common thread throughout Indo-European cultures was the Wolf Cult. Before youths could take their place as fully-formed functional men in society, they had to live as outlaws: wolves on the fringes of civilisation. In ancient Greece, this was also practiced. The young men were known as Hybristes (ὑβριστή), meaning “hubris men.” This is because their time in the initiatory warband is outside of the natural order, as they live much like bandits. This epithet is also given to Titans in the Greek mythos, as it conveys the quality of unlimited violent insolence. The young men are thus guilty of hubris (ὕβρις): the arrogant pride that offends the gods, but are forgiven its consequences while wearing the wolf hood. The Athenians called them the Epheboi, the Spartans called them the Krypteia, both states having slightly different roles for these young “outsiders.”

There was a critical moment when a boy turned 17, where they had to go through an initiation of manhood. This was normally a period of around 2 years, where he would have to leave society and live in the forests and mountains with other boys his age. The Hybristes would put on a figurative or literal “wolf hood” and act with impunity. They hunted, raided rival state’s agricultural and pastoral resources, and acted in a generally wild manner, indulging in the more animalistic urges of a young man. They were given very little in terms of resources; a cloak, dagger and spear. They had to use all of their skills to survive through their rite of passage and reenter society.

The main god responsible for the Hybristes was Apollon. One of the epithets of the light-bringer was Lykeios – wolfish. Apollon the wolf god was a pastoral wind deity who was associated with wolves and the caves in which they lived. This role also made him the patron of the Greek Wolf Cult. He was responsible for helping the boys become men. As Apollon was also the deity who embodied the solar path of order, his roles cross over. He is both the embodiment of order, as well as being responsible for the young men who lived outside of that order, but were destined to return to it as fully-fledged mature warriors. These Hybristes would enter back into the Polis (city-state) and become valuable assets, capable of governing and defending the city and its interests.

In Mythology, there are several personifications of the Hybristes as youthful hero archetypes. The two notable examples are Perseus and Theseus, both of whom must go through the hybristic rites of passage as outsiders to become the rulers of their dominions. I go into detailed analysis of these two figures and their journey in my book Undying Glory: The Solar Path of Greek Heroes.

The Spartan Hybristes were called the Krypteia, or “secret service.” All Spartan men from the Spartiate citizen class went through the agoge, a tough military training that began when they were seven years old and continued until they were 29. At the end of the first stage of training, at age 17, the most promising boys with leadership potential were entered into the Krypteia. The main role of the Krypteia was to terrorise the servile Helot population. The Helots were the subservient people who lived under Spartiate dominion. Every Autumn, the newest class of kryptai were sent into the countryside to wage a symbolic war on the countryside Helots so as to keep them in line and to prevent insurrection.

Armed with only knives, they were given explicit instructions to kill any Helot they encountered and steal whatever they needed. They were told to seek out the strongest and best of the Helots in particular. If they were caught performing their mission by other Spartiates, they were punished with flogging. This encouraged stealth: a Spartan trait. The institution of the Krypteia predates the formal agoge, as it came from the earliest days of Spartan rule, when the Indo-European Dorian people invaded the Peloponnese from the north. The Dorians, ancestors of the Spartiate class, were also called the Herakleidai; the children of Herakles.

The Athenians had a more institutionalised version of the Hybristes (called the Ephebeia) by the time their society had fully-matured. Epheboi attended an academy and upon graduation were given a shield, spear, cloak and hat, before being sent off to garrison and patrol the borders of the Athenian territories. They would fight in skirmish battles and fetch sacred objects for religious festivals. This more formal institution, which ended by the 3rd century BCE, was a late form of the original Black Hunter, as Vidal-Naquet called them.

The original Ephebe was armed with a spear and wore a black cloak. Aged 17, he was sent out into the wilderness where he had to hunt to survive. He would have to use aggression, stealth, guile and trickery to complete his time on the fringes. These traits also brought the Epheboi under the aegis of Hermes, one of the patron gods of Athens. The trickster god takes some of the responsibility for the Hybristes from his brother Apollon in the Homeric hymn to Hermes, by both conducting a cattle raid on his herds and solidifying his close friendship with the light-bringer. The Athenian Epheboi also came under the patronage of Dionysos of the Black Goatskin, as their behaviour was more Dionysian than Apollonian. During the Great Dionysia festival, the Epheboi sacrificed a bull to the god.

Today there is no meaningful rite of passage for young men. The purpose of the Hybristes, to let the young men go wild, but become self-reliant and thus useful to their society, has no modern equivalent. Without these institutions for the young to come into manhood, it is hard for the modern man to understand his place in the world. Instead, the violent, animalistic instincts of young men are channelled destructively (often self-destructively), leading to a society filled with dysfunctional adults. Instead the university campus or the bar district of a town have become the setting for young men to release their violent and sexual energy.

A culture that gives young men a structure through which to channel their raw energy in a more constructive way, rather than punishing them for its misdirection, fills its ranks with capable, strong men who are able to lead and defend. It creates heroes.